Gallstones – what are they?

The Cleveland Clinic explains that the gallbladder is a small, sac-like organ that sits under the liver on the right side of your abdomen (belly). The gallbladder stores a greenish fluid called bile. Bile is made and released by the liver and then sent to the small intestine, where it helps the body break down and absorb food. Bile moves through a network of tube-like structures called bile ducts. 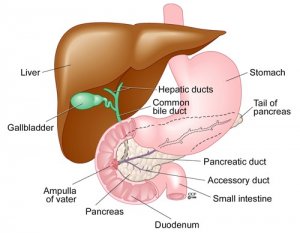 Gallstones are small stones that form in the gallbladder. Usually, they consist of cholesterol.  According to HSE data, if you have gallstones, in the majority of cases, you won’t need treatment and you won’t have any symptoms.

The risk of gallstones is higher if you are:

When you have symptoms caused by gallstones, this is called gallstone disease or cholelithiasis.  The HSE advises that treatment is necessary if gallstones are causing:

A HIQA report explains that the symptoms arising from sudden and complete obstruction of the cystic duct or the common bile duct by a stone is called ‘biliary colic’.

In some cases, you may need surgery to remove the gallbladder. This is often known as a laparoscopic cholecystectomy and the HSE note that there is generally a low risk of complications.  The Cleveland Clinic explains that the benefits of laparoscopic cholecystectomy (ie, keyhole surgery) over open surgery include less pain, less time in the hospital and quicker recovery. They state it is now considered the “gold standard” for surgical treatment of gallbladder disease.

A HIQA report notes that biliary calculi (that is, gallstones) are one of the most common surgical problems in the western world. Gallstone disease is the most common abdominal condition for which patients are admitted to hospital in developed countries. This report notes that gallstones are at least twice as common in women and that the increased risk in females begins at puberty and is increased further with the use of the oral contraceptive pill.  The report also notes that patients with a body mass index (BMI) greater than 40 Kg/m2 have been shown to have a risk of having gallstones eight times higher than those with a lower BMI.

“I would give the service an a ten absolutely. I was provided with the pros and cons regarding how a case like mine could go from the start. This gave me sufficient information to make my decision as to whether to proceed or not. I appreciated having the facts from the outset. From reception to the solicitors I dealt with, everyone was friendly and efficient. I will definitely recommend you to others.”

The NHS in the UK reports that surgery to remove the gallbladder (also known as a cholecystectomy) is relatively safe procedure, but like all operations there’s a small risk of complications. Some of the possible complications are the following:

Similarly, your surrounding organs can be damaged as part of the surgery.

After the gallbladder is removed, sometimes bile fluid can leak into the abdomen.  Sometimes a further operation is required to drain this bile.

A HIQA report notes that the most serious complication of cholecystectomy (open and laparoscopic) is damage to the common bile duct.  It states that the incidence of bile duct injuries varies between 0.1% and 0.3%.  The report notes that other complications of cholecystectomy include bile leak, peritonitis requiring re-operation, postoperative bleeding requiring operation, and intraabdominal abscesses requiring operation. The laparoscopic approach is associated with a lower rate of surgical site infection when compared with the open procedure.

How to know if there have been complications with your surgery

The NHS advises that it will usually take two weeks for you to return to your normal activities if you have a keyhole (or laparoscopic) surgery.  If you have an open procedure, it will take longer (around 6 to 8 weeks).  There can be temporary side effects from the surgery feeling sick or painful wounds.  However, the NHS advises you to contact your doctor if you experience the following as they could be a sign of a complication of the surgery:

Accidental injury to the bile duct

The Cleveland Clinic explains that during surgery, a bile duct can get cut, burned, or pinched. As a result of an injury, the bile duct will not be able to work right, leaking bile into the abdomen or blocking the normal flow of bile from the liver. Bile duct injuries lead to symptoms that can be painful and dangerous if not treated.

Some studies estimate that bile duct injuries occur in 1 in 1,000 cases of laparoscopic gallbladder surgery. They appear to occur less often in open surgeries.  The Cleveland Clinic notes that most bile duct injuries that occur during gallbladder surgery happen because the area around the gallbladder and bile ducts is masked in some way so that the doctor cannot see it clearly. This can happen if the area’s structure (anatomy) is different than normal, or if there is a lot of bleeding, swelling, or scarring in the area. They say that some doctors think that using a test called intraoperative cholangiography (IOC) more often will help reduce the number, or severity, of bile duct injuries, while other doctors believe that not all injuries can be prevented, even with IOC. Other doctors suggest that changes in how the surgery is performed and the equipment used will reduce the number of injuries. However, not all bile duct injuries can be prevented, so they remain a possible risk of gallbladder surgery.

A study involving researchers from University of Oxford reported that factors that may contribute to bile duct injury include anatomic variation, severe inflammation, errors related to skill, knowledge or judgement of the medical professionals or demographic factors such as patient age or sex.

Impact of a bile duct injury

The Cleveland Clinic notes that the patient outcome depends on the type and extent of the injury and how soon the injury is found. Most bile duct injuries can be successfully repaired, and the patient can go on to have a good quality of life. In severe cases, with more than one surgery, many months of recovery might be needed.

The University of Oxford study reported that bile duct injury accounts for the largest proportion of negligence claims following laparoscopic cholecystectomy in the UK.  In the UK, claims for compensation in respect of bile duct injuries and hospital negligence frequently succeed (most commonly, by way of settlement out of court).  This study contained data from a 15 year period to 2009 and in this period, 65% of the cases studied were found in favour of the patient.  This study also reported that the average cost of compensation per patient was above £50,000.  In the USA, the findings are similar but the compensation amounts are much higher.

If you have suffered a bile duct injury, we can advise you on whether or not you may have a case.  We will take up your medical records and obtain a medical report which will assess your injuries and examine whether anyone was at fault.  At that stage you can decide whether or not it is appropriate to proceed with a claim.  We have access to specialist medical consultants, generally in the UK, who will prepare these reports.

We have acted in successful cases where our clients have suffered common bile duct injuries as part of laparoscopic cholecystectomies for gallstones.  The majority of these cases resulted in our client having to undergo further surgery to address the issue.  Our medical experts identified flaws in the surgery and aftercare and were often critical of the record keeping of the hospitals.  Lack of adequate record keeping is often a very frustrating element of the process for our clients as they try to establish what went wrong with their surgery.