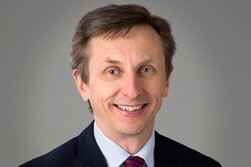 Niall Farrell is the Managing Partner of the firm which was founded by his father Mr. Patrick Farrell in 1976. Niall qualified as a Solicitor in 1988 having studied at University College Dublin.

Niall is also a notary public which is a public official appointed by the Chief Justice primarily to certify and authenticate documents for use abroad.

He practiced in London initially where he worked in the areas of personal injuries claims, business disputes, family law and serious criminal cases. He is a qualified UK solicitor as well as an Irish Solicitor.

Niall was a member of the Council of the Law Society of Ireland for many years and has been chairman of many of its committees. He is currently Chairman of the Solicitors Disciplinary Tribunal, a committee which is appointed by the President of the High Court to deal with serious complaints against Solicitors. He is also a member of the Incorporated Council for Law Reporting in Ireland which produces the official record of Court Judgments. He is also a member of the Courts Martial Rules Committee and chairs Mental Health Tribunals for the Mental Health Commission. In addition, he has been an adjudicator in disputes brought before the Private Residential Tenancies Board and has chaired many Garda disciplinary hearings.

He is a director of a number of charities and provides free legal advice through FLAC.

Niall’s special areas of interest are:

Niall is experienced in probate and inheritance disputes, having been involved in many of these cases since he qualified. He has acted for executors in estates where there have been claims against the estate.

The firm has extensive experience in these types of cases, having acted in the Supreme Court in one of the main Irish cases regarding the interpretation of Wills in 1978 .

Niall has considerable experience in medical negligence cases. He has acted in cases involving medical negligence in both public and private facilities. Most people receive a very good standard of care when they are finally admitted to hospital and no medical procedure is completely risk free. However, accidents will sometimes happen and clients want access to experienced advice so they can get a proper explanation of what happened and if appropriate, compensation.

A significant part of Niall’s time is spent on cases involving the Elderly. He advises elderly clients on Wills, Enduring Powers of Attorney, managing their assets, property issues and family arrangements.

Great care and patience is needed to ensure that elderly clients have made sensible provision for their legal affairs and in a way which makes legal sense and helps maintain good family relations.

There can often be friction between children and Niall helps his elderly clients organise their affairs in a way which will have the best chance of ensuring good relations between family members in the future.

Niall advises on tax planning so that assets and businesses can be passed to family members with the least tax possible.

He advises on the Fair Deal Scheme and the property issues surrounding it.

He advises families where a person is no longer able to look after their affairs and where because they have no Enduring Power of Attorney in place and there are legal/financial issues, may need to be made a Ward of Court. In those cases, the Wards of Court Office (under the supervision of the President of the High Court), look after their affairs.

Niall acts in cases where a person has been made a Ward of Court. In these cases, he works to protect the interest of the Ward and ensure that their assets are protected for their benefit.

Niall provides legal advice on business issues, commercial property transactions, commercial agreements and commercial disputes/litigation. He has acted for two of the largest financial institutions in the state throughout the country and has been involved in actions against multinational companies.

Niall has a special interest in farming and equestrian law. He works on farm partnership agreements, farm transfers, farm inheritance and farming disputes.

He also deals with syndicate agreements, stud leases/purchases/sales and disputes regarding horses and all equestrian matters.

Niall is a motorcyclist and has an interest in motorcycle law. See our dedicated site www.motorbikelaw.ie.

Niall has written articles for newspapers and has appeared on national radio and television.

Here are some of the cases in which Niall acted:

Niall is married with five children and lives on the Curragh. His interests are music, motorcycling, woodwork and equestrian matters.

© Patrick J Farrell and Company LLP, Solicitors. All rights reserved. Web Design & Web Development by Acton Web. * In contentious business a solicitor may not calculate fees or other charges as a percentage or proportion of any award or settlement.
Cookie consent
We use cookies to optimise our website and our service.
Manage options Manage third parties Manage vendors Read more about these purposes
Preferences
{title} {title} {title}